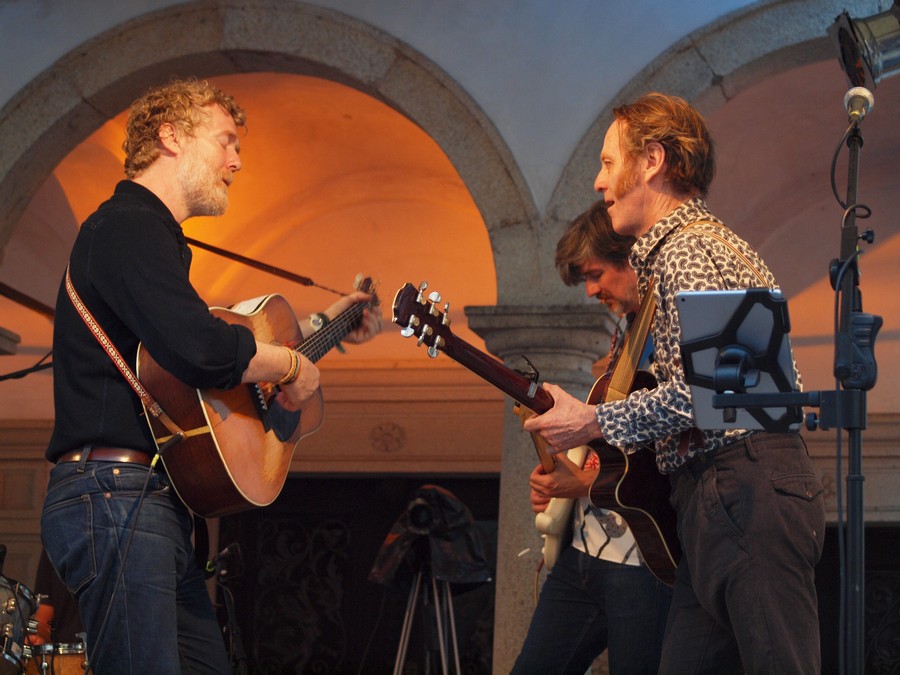 This is surely a dream come true for him as he had always been considering Interference the band he wanted to be in. This was also the only indoor gig of the tour and since the whole Europe has been experiencing really hot summer, both the band and the audience were quite suffering in the heat but it was worth it, no doubt. The night could be described as a big party full of energy that everyone who has ever seen Glen Hansard live, knows very well. But don't forget - Paul Tiernan can do that as well and it was clear when he sang The 13th Floor, one of his solo songs, and instantly had the crowd on the palm of his hand. He has released seven albums to date and is currently working on his 8th.
Camilla Griehsel, originally from Sweden, has a voice that goes straight into your heart and takes all the emotions out, even the hidden ones. She is currently touring with her own show called Mamasongue, songs in the mother tongue. It's a celebration of songs from distant lands, from various cultures, in various languages, performed by a passionate singer who seeks emotions in every performance. The next date for the show is going to be in Cork on September 15th.
The Shookies were invited on stage towards the end of the night to join Glen for Her Mercy and so the audience could enjoy the voice of Filip Burš again. The heat in the club was so unbearable that Glen said the party is going to continue outside and they are going to perform a very special song of Fergus' there that has its own life now. That song is Gold, known from the movie Once and also from the stage production of the movie. The crowd gathered on the street to listen to a few more songs, including Leonard Cohen's Passing Through which seemed quite funny when two trams tried to pass through on their way to the depot.

The packed courtyard of Telc castle welcomed Interference and Glen Hansard on another stop of their Czech tour on Thursday, August 9th . Straight away, Glen introduced the main man, Fergus O'Farrell, to the audience. Fergus couldn't be there for obvious reasons but he was definitely present not only through the songs but also in the thoughts and hearts of everyone on stage. The atmosphere was emotionally charged again but both the artists and the audience enjoyed it to the fullest and didn't want the night to end. You could hear a pin drop, especially towards the end of the night when Glen performed an unplugged version of Dark Days, one of the most powerful songs of Fergus'. Another highlight came when Paul, Camilla and Glen stepped off the stage and performed an evocative version of O'Farrell's song Gold as close to the audience as possible. That's how everyone likes it. Two and half hours flew by too quickly. Too many emotions for one night. Too wonderful not to be repeated.

Interference loved every minute of every show on this tour and they're gonna be back soon (hopefully once the documentary Breaking Out is finished).