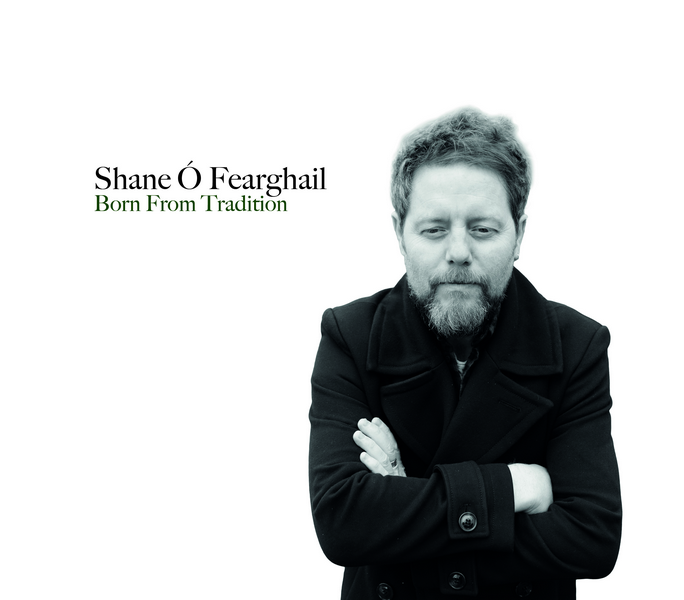 Shane Ó Fearghail from Dublin (Tallaght to be exact), now residing in Vienna, is the perfect example of somebody who maybe living away from his native land but the native land, its culture and everything that goes with it, is deeply present in his being and in his art. He's previously released three albums and now he returns with the fourth offering, very appropriately titled Born from Tradition. The thought of releasing an album that's literally born from his roots had been on Ó Fearghail's mind for some time and he now turned the ideas and plans into reality. The album was born between Dublin and Vienna and it does nothing less than sealing Ó Fearghail's reputation of a craftsman.

The album contains six originals and four traditionals re-imagined in a typical Shane Ó Fearghail style with love and respect that an Irishman feels towards the heritage flowing in his veins.

I like it when you try has that slightly romantic air about it and the line "I am in New York and I need support" makes you run over and give the singer a hug. This is one of the tracks where Ó Fearghail  shows the traditional side of his musician self and plays bodhrán in a section of the song. That adds another layer to the already enchanging  track which, yes, is sweet and romantic but in the right balance, the artist knows where to stop. The backing vocals from Sabine Mann and violin from Claudia Heidegger create the perfect equality in all departments.

You can hear the roaring wind in Roll on the Wind which describes the journey of the Irish away from home in a chase of better life. Shane Ó Fearghail is no stranger to moving away from his native land and you can hear nostalgia or even sadness in certain parts of the song. Some may say this is engraved in the Irish soul as there are not too many happy Irish songs anyway.  But there is hope and the outlook is positive, aiming towards the brighter horizons. How fitting in current climate where there is too much negativty out there and people are just craving any kind of good news or positive vibes not to loose sanity.

Reynardine is the first of the re-imagined traditionals. in this case an English ballad.  Reynardine is a werefox enchating beautiful young women and taking them to his castle, their fate afterwards being unknown. You may take it as a cautionary tale. The violin paints the lines and pieces of the story not mentioned but everybody is aware what is going on. The careful and attentive approach to the tradition is more than clear.

The album contains two songs as Gaeilge which brings even more authenthicity and the "back to the roots" feeling. Trasna Na gCianta, about the journey of the Irish, past and present, is a rework of the song Round the Hardway from his debut album The Watcher & The Comet.  The song has been on the RTÉ Radio 1 (Irish national broadcaster) Recommends List for two weeks running.  Many listeners may not have a clue about the meaning of the words but the sound and the music do the work and create an impact. You get the sense of urgency from the vocal delivery and the sense of importance, that being Irish means very much to the singer, regardless where he currently finds himself.

Green Fields of France is another trad re-imagined. Powerful song about the death of an Irish soldier in 1916. It is evocative, heavy with all kinds of sentiments but consider the circumstances and everything. Molly Mallone is one of those songs that you know even if you have never been to Ireland. One of those songs asking for a sing-along. Brave to take such a classic on but Shane Ó Fearghail has the courage to do so and more importantly, has the faith in himself. The simple arrangement suits the song and highlights the musical and vocal abilities.

A great album shows itself by the simple fact that nothing interrupts the flowing of the songs and you reach the end way sooner than you want. And given the quality of the songs, it gets next to impossible chosing a highlight or a track that stands out. But you eventually get there. And in this case, that track is called Anyway, openly describing the hardship of living in the outskirts of the society and the hardships of starting the life over, longing for a chance. The raw arrangement with guitar and vocal only brings the slightly unsettling feeling up as you listen. Unsettling as it has quite a political tone as well and above all, it is a reality too many know too well.

Nearing the end of the album, New England keeps the political theme, this time gets more direct, not being shy in expressing anger, frustration, need for a change. Ending the collection with the classic of classics, something every Irish kid probably knows. Raglan Road, written by Patrick Kavanagh, approached once again with great care and consideration, Ó Fearghail's vocal sounding haunting and being as evocative as the words demand.

Careful observers will notice "volume one" written on the back sleeve of the album. It does two things to the listener after hearing such an accomplished collection. It makes you press replay and there is also the desire to hear more as soon as it is humanly or artistically possible. You can bet all your savings on the fact that anything this Celtic warrior comes up with is another branch of his tree of art. You can't go wrong with anything where your heart is. And we know exactly where Shane's lies.