Power of the Irish charm 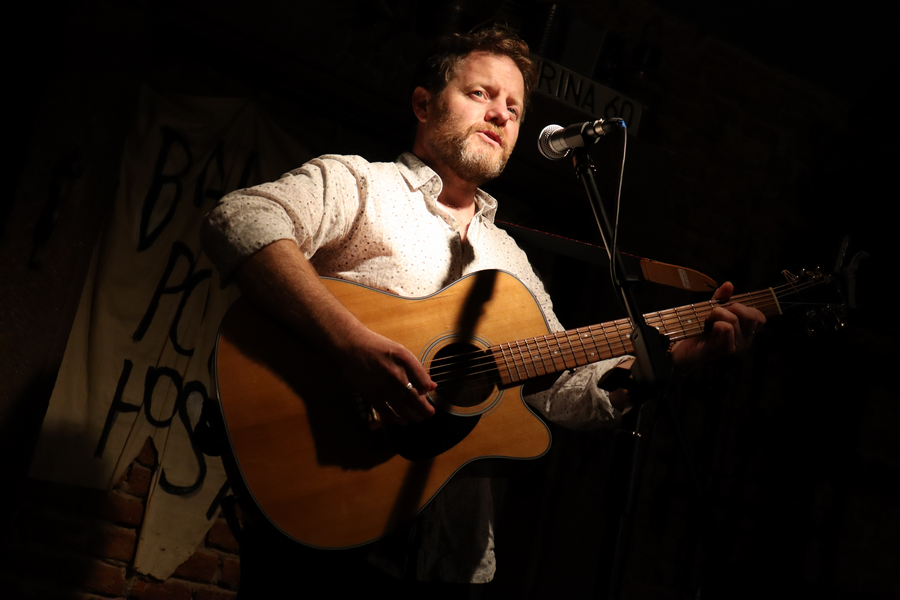 Playing in a new country and therefore new venue for the very first time can be stressful and perhaps a little intimidating for a musician. You are not sure whether people will come to the gig, in many cases there is the language barrier to face too. None of this seemed to be a problem for Shane Ó Fearghail, an Irish singer/songwriter based in Vienna who came to Prague to play his Czech debut in Balbínka, very well-known venue in the capital. The gig was originally supposed to take place back in April but everything was postponed, rescheduled and stripped back due to current situation. Summer dates are probably not the best ones but when the later ones are booked out already, you have to play the cards you get.

Right from the start, Shane seemed to be right at home in the venue. There is something special about the place. Something in the air that attracts like-minded souls, performers and the crowd alike. Shane’s warm personality won the hearts of the audience straight away. He came to promote his new Irish album  Born from Tradition. It contains six original songs and four traditionals in Ó Fearghail’s arrangement. In English and Irish language. He maybe based in Austria  but he’s a Gael to the core and it can be felt from everything he does. Be it singing in gaeilge, his mother tongue or playing the bodhrán which most people associate with the Irish anyway. There is no denying of how proud this man is of his roots.

The room was quiet, attentive audience waiting to see what the charismatic Irishman is going to come up with. And they were surely in for a treat right from the first chord. Ó Fearghail played a mixture of new songs from the album, older ones (Star, Elastic), favourites (Faerie tree where the Celtic feel is palpable) and unreleased material (Valley of Coincidence). There were smiles and jokes throughout the night including the mention of the relationship between the Irish and Czechs. “It started 20 years ago with Glen Hansard” said Ó Fearghail “ which is a good beginning, we love Glen.” This was followed by a well-known song Óró, sé do bheatha bhaile which Irish people know from their school days.

Shane threw a few covers in the mix on the night as well, confessing his love for The Beatles along the way. The covers also included songs by Eurythmics (Sweet dreams) or Elvis Presley (Can't help falling in love). It’s always a pleasant thing when a musician from a different country tries to learn a few words from the language of the country he plays in, to engage more with the audience. Shane learnt a few words in Czech, one of the most difficult languages out there as they say but being a musician he certainly has an ear for these things.

It might have been the maiden performance in the Czech Republic for Shane Ó Fearghail but certainly an impressive one and we have no doubt he'll be back in no time.