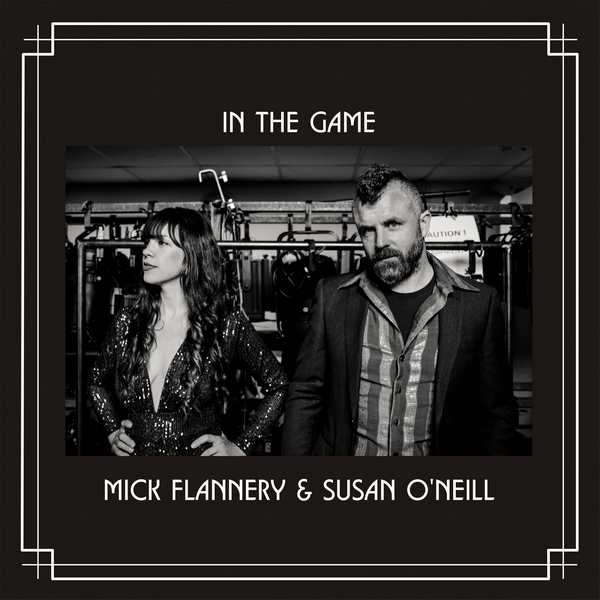 In a first for Flannery, one of Ireland’s most acclaimed songwriters and singers, he and Irish newcomer, songwriter, and multi-instrumentalist Susan O’Neill have come together on a collaboration album ‘ In the Game’.  The award-winning, double platinum selling artist has released six studio albums, three of which reached No. 1 status. His last offering in 2019 received high praise as his finest to date: ‘Mick Flannery has a voice for the ages, a complete Master of his craft’ cited by Clash Magazine, whilst The Sunday Times said he “conjures up exquisite story-telling’. ‘In the Game’ does not break this spell, as Mick continues to deliver stories never heard before. This time with a story-telling partner, by way of the unparalleled voice of Susan O'Neill.

Having wowed huge festival stages over the past few years moonlighting with Irish dance band ‘King Kong Company’ and accompanying the queen of traditional music Sharon Shannon on her international tours, Susan has now spent the last while honing her own craft.  Susan is a songwriter of hidden depths, a singer with a voice that is equal parts balm and blowtorch. She is audacity personified, a free spirit. A real performer.  As of now Ireland’s best kept secret, on the release of ‘In the Game’ this however is all about to change.

The album was written and recorded over the summer of 2020 during lockdown, between Cork and Los Angeles.  Produced ‘virtually’ by LA based, Australian producer Tony Buchen (Courtney Barnett, Smashing Pumpkins, Tim Finn), and featuring musicians from both Ireland and America. In the Game’ is a journey familiar to most.. Check out the tour dates here

This highly anticipated album fulfills all expectations and goes beyond. Both Flannery and O'Neill share equal space, letting their craft shine, not stealing the spotlight from the other. The songs are deep, somewhat familiar, dealing with familiar themes. Like a couple in a long-term relationship, Mick and Susan guide us through ups and downs, joys and troubles,  everything that life brings. Sometimes you find yourself on the verge of breaking things up but then you realize you're together for a reason. "In the Game" is like that. It will break your heart, make you feel loved, happy to be alive, grateful to have kindred souls around you.

There's warmth and longing for companion in Lonely Wins, as honest and raw as it gets.  Blue River is a nostalgic number, almost as painful to listen to as the hurt expressed in the vocals. Something that makes you want to go back to the happier times. However, it doesn't make you depressed, just mourn something you lost.

An artist is somewhat compleled to experiment, push the boundaries and both Flannery and O'Neill have exposed their hearts with the raw and vulnerable songwriting that's presented in these songs. Perhaps they discovered something they had no idea was there.

In the Game was recently RTÉ Radio 1 Album of the Week. Two distinctive artists. Two voices. One album. One unique sound.