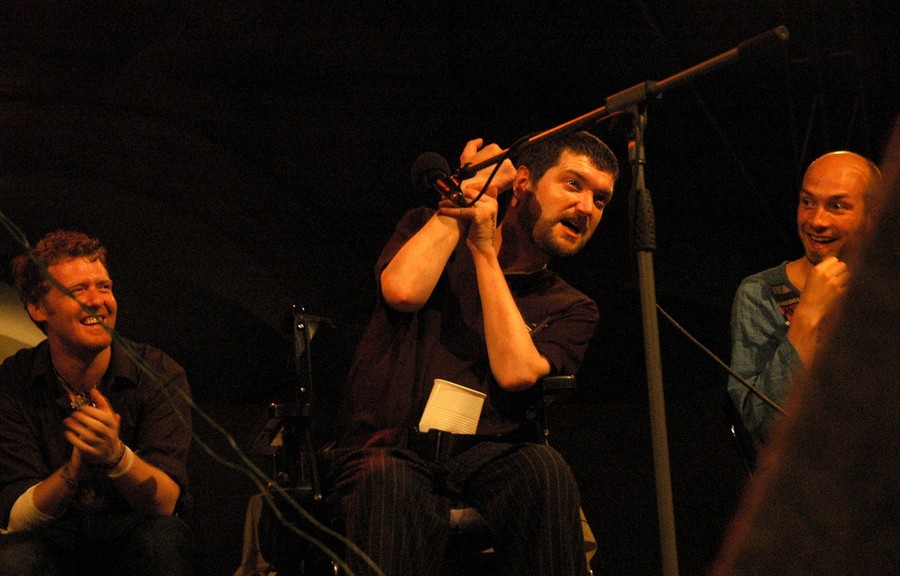 There are news you can never be ready for. The one that came on February 2nd about the sudden death of Fergus O'Farrell of Interference, was one of them. The charismatic artist who ended up on a wheelchair due to muscular dystrophy, passed away at home, aged 48. A few days before Colin Vearncombe aka Black passed away and Fergus was due to sing at his funeral. But the destiny had different plans...

Those of you who love Ireland and know the Irish music scene couldn't miss Interference and their songs. O'Farrell's unmistakable voice and philosophical lyrics which make the listener think way beyond what's said have instantly earned admirers after listening to the CDs or seeing one (or more) of the very rare live performances. Seeing the band live was always special. They also played in the Czech republic at Folk holidays festival in 2005 and 2007 and in Slovakia at Pohoda festival in 2010. Speaking of Folk holidays festival it's worth mentioning the fact they played there thanks to Glen Hansard who admires Fergus very much both musically and personally. His reaction to Fergus'passing speaks for itself "Fergus O'Farrell. A true artist and a hero of mine passed today. And I loved him so.."

The last sentence is taken from the song "Gold" from the movie Once. O'Farrell appeared there again thanks to Hansard and got the recognition that – according to many – was supposed to come much earlier.

At the end of January Glen Hansard spent a week recording with Fergus, friends from The Frames and Interference and we can hope these recordings are gonna see the light. The funeral took place on February 6th in the town of Schull in west Cork. Those who attended the ceremony and the following celebration of Fergus' life describe it as an incredible experience full of love, warmth and respect.

Despite being an inmensely talented musician, Fergus O'Farrell was also a painter. Over the years the illness had taken away his ability to play the piano and the guitar so he had to find another way to express himself. His paintings are joy for all senses, intense colours and geometric shapes give an opportunity to everyone who sees it to interpret it their own way. Here's a link to an exhibition from last August which he did in Schull with another artist Yoko Akino.

Whether you met him once, knew him for a long time or were fortunate enough to see Fergus performing live, he surely left a huge impact on you of admiration and inspiration. You realized the best thing you can do is to live your life to the fullest and not to care about things that aren't that important in life. The other thing you realized was that those who'd have a reason to complain aren't usually looking for it at all. They have "a talent for life" and this title was used by the RTE radio station in 2012 when they did a documentary about this exceptional man from which it's clear that Fergus O'Farrell has a plenty of optimism and life energy to give away. However the destiny has a strange sense of humour and strikes when we least expect it.

Let me end this tribute with a personal note: Fergus was one of the bravest people I've ever met, I feel blessed and honoured to have known him and his kindness and inspiration will stay with me forever...

This article became a part of the catalogue of Folk holidays festival 2016. Huge thanks to Michal Schmidt for that!