Let the music speak - no words are needed 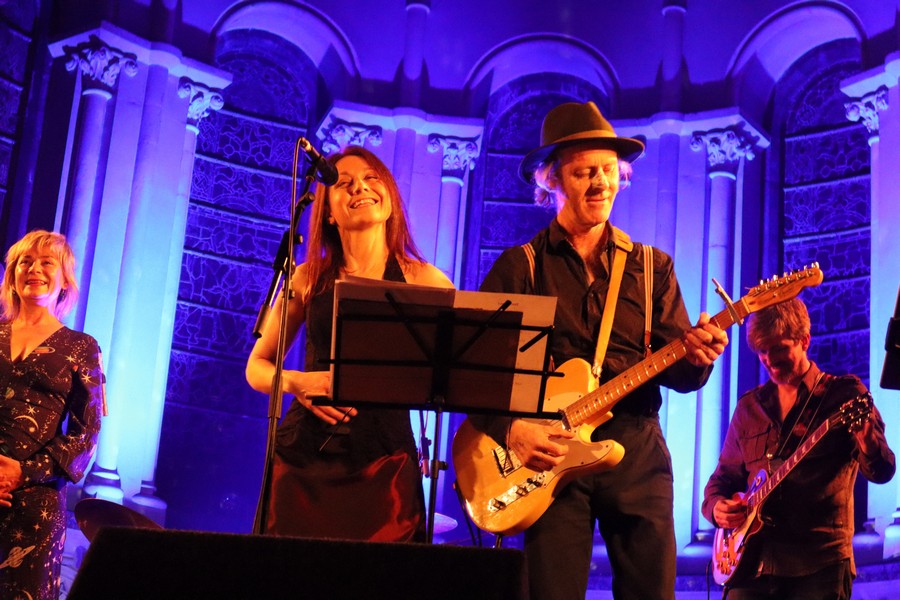 Some events are attracting the audience because they're taking place in a special location or there is some not-to-be-missed artist performing. The start of St.Patrick's Day weekend in Cork had it all - a breathtaking venue of the former church of St.Luke's. It promises an unforgettable night right when you enter. And the artist? None other than the legendary band Interference. Their Cork gigs are always something else. Magical timeless gathering of an extended family.

Elaine Malone opened the proceedings of the night. The overall sound could have been better as most of the time you couldn't understand the words she was saying, even singing. Her style might not be everyone's cup of tea, hard to exactly define the genre. All got even more atmospheric when she invited a fellow musician on stage and he started providing strange sounds from a box. Some might think they were calling the spirits in which would have been very appropriate.

After a little break the legends that are Interference took the stage and you could tell right away this is going to be a very special night. You don't get to see them in a venue like this every day. The magic was in the air without doubt. When Anthony Noonan started singing, as guitarist Paul Tiernan put it, one of the band's all-time favourites, American townland, you realized yet again the power of the late Fergus O'Farrell's songwriting. This song maybe written a few decades ago but when you hear the words " stop fighting for your gods, they can't hear you now with the noise of your guns"  you feel it could have been written yesterday. It makes you think Glen Hansard was right when he once said there's certain prophecy in these lyrics.

it's never easy to pick out a highlight of a gig like this because it's more than just a performance. As we mentioned earlier on, it's a gathering of like-minded souls. And there is magic hidden in every song, some are more powerful than others. When Camilla Griehsel invited her son Max on stage, those who have seen and heard him before knew they're in for a treat. Those who haven't had the chance were yet to be surprised. Because this young man has what it takes to be not only a great performer but he has all the emotional weapons in his vocal arsenal that a song like Breaking Out is asking for.

Gone are the days when people thought a woman can't sing a song written for man's vocal. When you hear  Camilla's take on I'm your man, one of the most beautiful love songs ever created, you instantly change your mind and immediately get the impression she can sing absolutely everything. Like it was meant for her to sing such song. An experienced singer like herself knows what she has to do but what makes all these songs so unique is the connection everyone has to the late Fergus. Another exquisite example of the band's powerful songwriting is Sail On. In a church setting this song sounds even more than haunting than ever but one thing is for sure - Fergus is always present whenever these songs are sung.

Paul Tiernan, whom Fergus used to call his right-hand man, is always happy to add something of his own into the setlist.  Especially 13th Floor which has become a classic at Interference gigs. Paul proves again and again he can carry the whole thing in a rockstar fashion.

We already mentiioned there are always more highlights than just one when these musicians get together. And this time the audience was in for something truly remarkable. The song is called I owe you nothing and it's in fact the last song Fergus was working on, hasn't been played live much yet. Some might remember the lyrics being read by Malcolm MacClancy at the two celebratory gigs in Cork and Dublin in February 2017. A true masterpiece.

Last but not least. Even those who aren't that familiar with Interference and their music know the song Gold that appeared in the movie Once. Fergus' niece Roisín Little sang this song as gaeilge (in the Irish language) to end the night and if the song doesn't normally gives you goosebumps, this version surely would. Roisín has an incredible voice, the talent is in the family and we are certain her uncle would be proud of her.