Imagining Home: This is Ireland 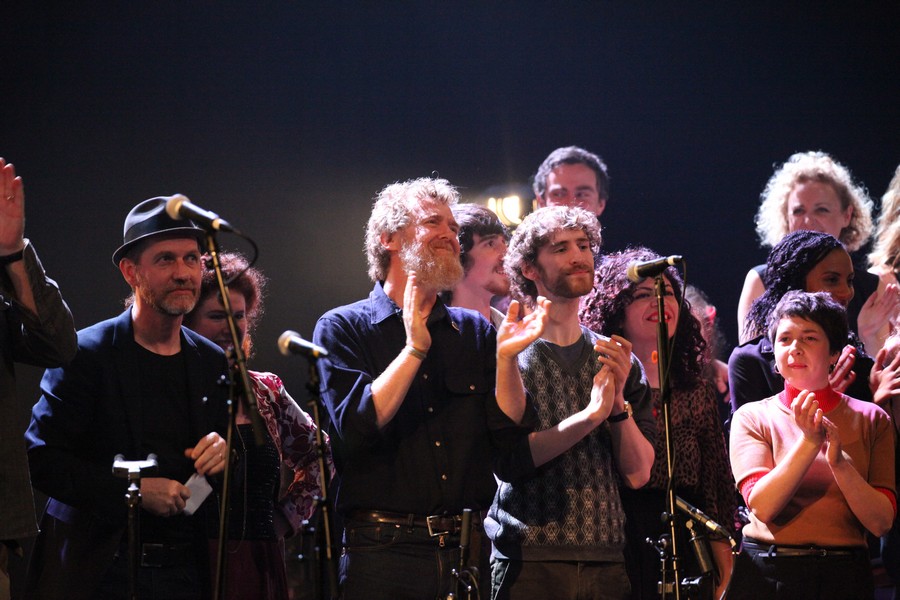 Everyone should be proud of their roots but every nation sees it differently. Irish people are very proud of their roots and it can be seen this year more than ever as the Irish republic celebrates 100 years of independence. There are many events concerning this anniversary and one of the highlights, broadcasted live on Saturday April 2nd on RTE Radio One, was special event at National Concert Hall in Dublin called "Imagining home: This is Ireland"put together by Glen Hansard. It has been sold out for long time and the combination of great musicians and contemporary Irish authors promised an unforgettable experience.

Artists from Ireland, Sierra Leone, Syria, The Netherlands or Czech republic  gathered to celebrate. Everyone was deeply honoured to be part of this evening. Phillip King of RTE Radio One gave a warm welcome to everyone first in the Irish language, then in English and started the evening with poem that says "where everything is music". Glen Hansard followed with songs Her Mercy and Vigilante Man (Woody Guthrie cover). Magic continued when Ireland's professor of poetry Paula Meehan joined in accompanied by the wizard of strings Colm Mac Con Iomaire. He contributed a few tunes of his own including one composed especially for this occasion. You were transported to a different world, forgot about every day worries and realized more and more the importance of the event and its emotional strength.

One of the emotionally strongest moments came when Glen Hansard, along with members of Interference, paid  a tribute to a dear friend, incredible songwriter and a person he has looked up to all his life, Fergus O'Farrell. Fergus was supposed to be part of this special night but passed away on February 2nd. Glen and the band played a few songs including "Gold", known from the Oscar movie " Once" and brand-new song " Something right" which is going to be released on Interference's new album. If you were sitting close enough you could see the faces of everyone and you realized how emotionally hard it is for them. Glen remembered his friend with love and respect and pointed out the fact that "Ferg wouldn't want anybody feeling low". Some people believe Fergus was present that night. And one thing is for sure – everyone whose lives were touched by this exceptional soul, will never forget him...

Hansard's fans have had various chances to sing along during the whole evening including a rare chance to see him playing the piano. "McCormack's wall" fitted perfectly into the night and even more with its instrumental ending in Irish traditional style. A bit of Irish tradition (including foreword in Irish language) was brought by Brendan Begley, acclaimed musician from Dingle. It's  incredible to see how Glen was able to put all these people together for one night. There were certainly a few who surprised everyone and this was the case of Ye Vagabonds, two brothers with very touching voices. No wonder Glen Hansard invited them on tour after discovering their music.  Lisa O'Neill is considered to be one of the most gifted songwriters at the contemporary Irish scene. Her voice is special and it's not everyone's cup of tea but that's also the magic of this event, to put together different styles, different personalities. Roddy Doyle, who invented various characters from The Commitments movie, also appeared on stage to contribute to the evening.

"Sometimes you meet people with heart of size of Ireland"

Modern technology has its advantage sometimes and you can find there artists that simply blow your mind. According to Glen Hansard, the poet Stephen James Smith is one of them. He lifted the audience from their chairs with his poem " Dublin You Are". In comparison, Loah, originally from Sierra Leone, has a very fragile voice which easily gets into your heart. Also she calls Ireland home.

This special night wouldn't be complete without Marketa Irglova, Glen's singing and once also a life partner. They enjoyed to be reunited musically after years. She sang a few of her own songs and a Pauline Scanlon's cover which has always reminded her of Ireland. A young piper from Wexford joined Glen for "Way back in the way back when", very interesting version indeed. The evening ended after more than 3 hours with a song that has become a national anthem – "The Auld Triangle." Fantastic evening of music and words will be remembered for a long time by those fortunate enough to see it live.