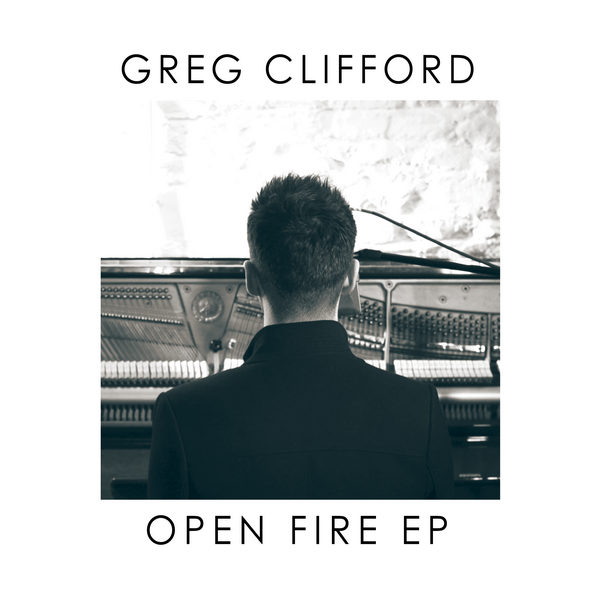 Greg Clifford is a Dublin based independent musician. His style is an authentic synthesis of Indie-pop rock fused with electronic aspects and 'classical' guitar fingerpicking. 2017 saw Clifford release a new LP entitled Quodlibet, as well as play 17 gigs across Ireland as part of a 3-act showcase called the 'Back to Basics' Tour.
Aside from his solo endeavors, Clifford works as a session musician, producer and arranger. He has also toured internationally with a classical guitar ensemble, scored for the RTE Concert Orchestra and holds a Masters in contemporary composition.

Title track, Open Fire, is a stripped back piano ballad which  showcases Clifford's vocal in its entire glory. Lines such as "this ship is sinking, my head's mess" make the listener stop and listen. Perhaps a metaphor for a mental health struggles that has become a frequent topic in recent years. Something that has to be talked about.

We Rise Again seems to be continuing the theme of mental health, in a sense that nothing is too bad that can't be fixed.  The song also highlights the togetherness which also gains even more importance under current circumstances. Everything you face gets easier when you have somebody by your side, somebody to share it with.

Chasing Ivy has some jazzy elements in it and seems to carry a lighter theme than the previous two. One of those timeless tracks that makes the time disappear and the listener gets lost in the moment and in the music.

Long Lost Friend is a bluesy piece that brings nostalgic feel into play. And the the desire of turning back the hands of time and maintaining the friendship that's now gone. The flute at the end pulls the right emotional strings.

Changing the mood yet again, A Particular Thing is a gentle love song. Clifford's vocal is soft, consoling at times, pondering upon the idea whether to give somebody who broke his heart another chance or whether to move on.

Closing the EP with another shift in a mood, How Did We Ever Come To This is a darker, more philosophical composition. Even Clifford's vocal is deeper, as if he went deeper into himself and looked on everything from the insight. Accompanied beautifully by the piano, this in our opinion is the highlight of this well-crafted selection.