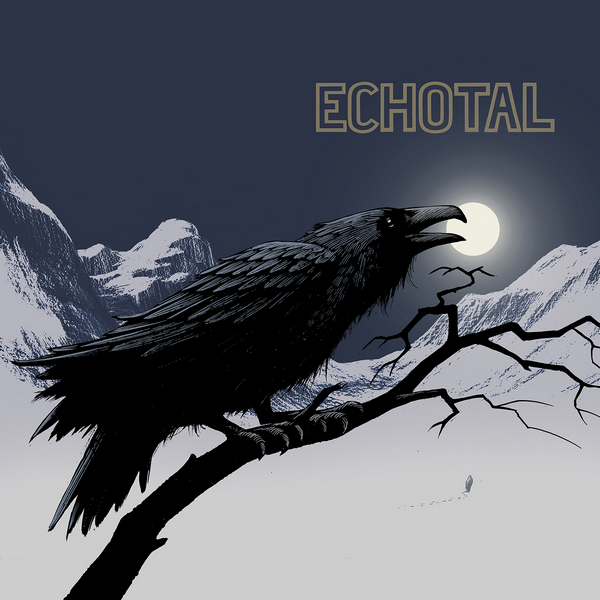 David Rooney has been working as a visual artist for over three decades creating editorial illustrations that have reflected the great changes taking place in Ireland and abroad. More recently he has been concentrating on historical subjects for books, museums and TV documentaries. Throughout, music has been his constant companion and finally, with some guidance, he discovered he could source his own music from the same well as the art. The Echotal project was produced, engineered and mastered by Torsten Kinsella of ‘God is an Astronaut’ who also co-wrote one of the tracks. It began as an exploration to interweave the two strands of my art and music more fully. At the same time Rooney was creating art for ‘God Is An Astronaut’ which culminated in their latest album release ‘Ghost Tapes #10’.

Multi-instrumentalist Jay Wilson, who was part of the band on Rooney's debut album ‘Bound Together’ in 2017, joined the project bringing his vast experience from touring and arranging with James Vincent McMorrow. Further collaborations followed with internationally acclaimed artists including cellist and composer Jo Quail, producer Ross Tones (aka Throwing Snow) and Hannah Cartwright of Snow Ghosts. All of whom added hugely to the project from their respective studios across the Irish Sea. Echotal’s debut EP is divided into instrumentals and songs. As with previous music projects, David Rooney is collaborating with animators and film makers to create a series of videos accompanying the work which will be integrated into future live shows.

Melting Ice is a calming instrumental guitar and string based piece. Quiet, gentle, melancholic, that kind that makes you relax but also brings the sense of nostalgia. The strings awake the emotions burried deep down. Atmospheric composition mainly in the second half when you finally understand its name. Talk about the music affecting your senses in various ways. This is what it's all about.

Endless starts with a choral that you would imagine in a church, almost a hymn-like. The track doesn't feature many instruments yet the simplicity works. This proves the simplier the arrangement the bigger the overall impact.

Hiding is guitar-based composition that starts with nice guitar picking, the vocal is full of emotions, feels like the singer is holding your hand and singing just for you. The melody warms the soul and brings relief.

The music for Glencoe was inspired by a shorter animation sequence that was originally commissioned for the National Trust for Scotland's Glencoe Visitor Centre as part of a film that portrayed the events of February 1692 when an estimated 30 members and associates of Clan MacDonald of Glencoe were killed by Scottish government forces, allegedly for failing to pledge allegiance to the new monarchs. Dramatic melody carries the warning, the darkness. The guitar softens the edges a bit yet the uneasy feeling persists.

you can watch the video for this track below.