Duke Special - Under the Dark Cloth 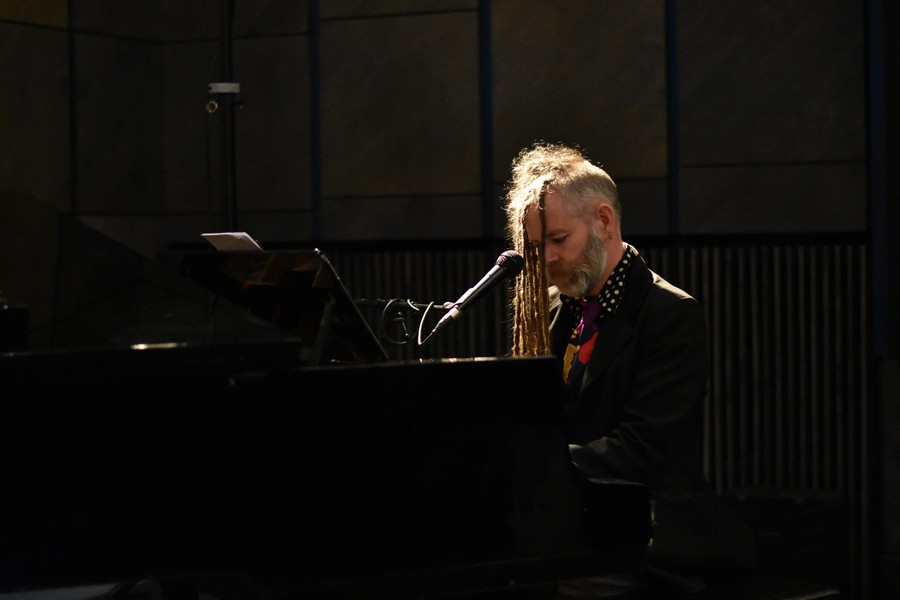 Northern Ireland's Peter Wilson, or Duke Special as he's known on stage, is without doubt one of the most original songwriters out there. He's been coming to Czech republic regularly for almost a decade and local audience has seen many different layers of his creativity but nothing like this. On Wednesday June 21st, as a part of the Valassky spalicek festival, Duke brought a truly unique production to Valmez. This production is called Under the Dark Cloth and it connects the photography as an art form and the music.

Its idea emerged in 2011 when the Metropolitan Museum of Art in New York was preparing an exhibition of three American photographers, pioneers of photography from early 20th century - Alfred Stieglitz, Edward Steichen and Paul Strand - and asked Duke Special to provide the music. He chose twelve photos and composed a song inspired by each of them. So far the show has been performed only in New York, London, Belfast and Dublin. It took the organizers of the Valmez festival four years to plan the whole thing. Those that came on Wednesday to see the performance were the first ones on the continental Europe to have this powerful experience. The screening of the photographs and Duke's songs were accompanied by a string quartet and it only added to the uniqueness of the night.

The songs varied from the lyrical ones (The Dancing Trees, Cherry Blossom Girl), reflection about new America and its direction (Spiritual America), biographical portraits (Georgia O'Keeffe, Rita de Acosta), reflection about the meaning of art and the passion for it (This is all that matters, Triumph of an Egg, In Memoriam) and also a famous slogan of the Kodak company about their new camera (a camera that can be used by anyone) was used in one of the songs (You press the button, we do the rest). There was a central idea shown throughout the perfomance - art in an inspirative force that we all need in our lives. The life without any kind of art would be sad and depressing.

During the performance Duke asked the audience to participate in the song Washerwoman, about an Irish woman who came to America to seek better life but the reality turned out to be completely different from what she imagined. The evening ended with a standing ovation, certainly well-deserved. One of those night to be remembered.