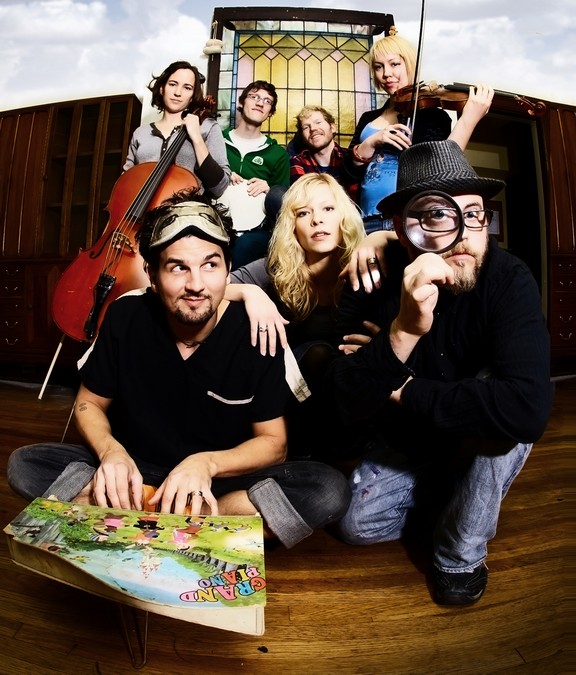 This year's edition of Folk holidays festival was full of hope. Artistic hope, human hope. Powerful message of hope was delivered also by an American indie rock band Cloud Cult from Minnesota. They were the highlight of the festival and it was also their European debut.

Cloud Cult were formed in 1995 by Craig Minowa and a tragedy had a significant importance for their songwriting. A tragedy that happened in 2002 when Craig and his wife, a painter and visual artist Connie, suddenly lost their young son Kaidin at the age of two. Everyone has his own way to cope with loss and Craig's was to lock himself in a basement with a guitar and recordings of his son's voice. He was writing songs and formed a basis of the band's repertoire. At the beginning Craig wasn't thinking of releasing the songs until his friend, a visual artist Scott West (who also paints during the live shows, together with Connie) suggested doing this. Until then Craig never thought he could make living by playing music.

The Minowas formed the ecological organization Earthology and their own recording label Earthology records. The main idea could be summed up in a question why are we here, who we are and what's the point of us being here on Earth, an intention to connect with higher power. The faith is very important for all Cloud Cult members but not in a sense of persuading others to believe in God but as a personal journey. You would expect the songs to be sad and depressing but the truth is they're not. They are intimate and personal and easily get under your skin. The paintings made live during the shows are auctioned at the end of each concert and Folk holidays were no exception. The proceeds went to the next edition of the festival.

The message of hope can be found on their new acoustic album Unplug released this year. The album emerged from three concerts held in Southern Theatre in Minneapolis and the band went through their discography, choosing songs with philosophical messages. For example, the lyrics of the song Step forward tell us to keep aiming towards the future, no matter how bad things happen to us.

In 2009 a film about Cloud Cult was released and called after one of their songs – No One Said it Would Be Easy. The film consists of material from 1999 to 2009, it combines gigs and backstage footage with exclusive interviews.